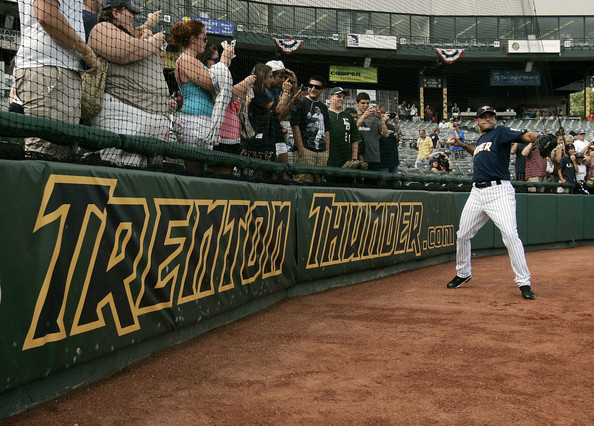 At 16-10, the Trenton Thunder are currently in tied for first place in the Eastern League’s Eastern Division, a familiar theme for fans of the New York Yankees’ Double-A affiliate. The Thunder have been prominently featured at or near the top of the standings since the organization decided to put more focus on their farm system than ever before back in 2016.

But unlike recent memory, this team is missing an abundance of high-end talent, both due to graduations (Gleyber Torres, Clint Frazier, Miguel Andujar, amongst others) and transactions (Justus Sheffield, Billy McKinney, Dillon Tate, et al.)

One scout who I have been in contact with over the last five years spent time in New Jersey recently, and one thing immediately jumped out in his mind: “Unlike years past, this current Thunder team hardly features any players who will make a difference at the big league level.”

That’s to be expected when the Yankees have found success in all areas of scouting: whether be it through the draft, international free agency or trades.

“It’s not a fault of their own; it’s actually the contrary,” said the talent evaluator. “They’ve had a great deal of players either move up in the system or get traded for players to help at the major league level. Plus, there are puppies getting ready to make the jump in Tampa and Charleston. But as this roster stands today, there isn’t much to be excited about.”

There seems to be consensus with that thinking. Only six of the MLB Pipeline’s top 30 prospects are currently suiting up in Trenton (that’s not including Estevan Florial – widely considered the franchise’s best overall prospect – who started 2019 on the injured list).

But there are players to be excited about with the Thunder, even factoring in the current dearth of high-end talent.

For this scout, it starts with Albert Abreu.

Abreu, the right-hander currently ranked as the Yankees’ third-best prospect, was acquired along with Jorge Guzman in a trade with the Houston Astros for Brian McCann in November 2016. The Dominican native has flashed top of the rotation potential throughout his career in New York’s farm system but injuries have derailed his path to pinstripes.

Abreu’s command can be largely contributed to his slow start to the 2019 season. Through four starts before his game against New Hampshire, the 23-year-old posted an array of bloated numbers, including a 7.31 ERA and .415 BAbip, in just 16 innings. Abreu did turn things around in his final start of the month, scattering three hits and three walks while garnering four strikeouts in a season-high six frames.

“I’m still on his bandwagon,” said the scout. “He is healthy and has top of the rotation stuff with pitchability. He was struggling with fastball command. When pitching the power game, he needs to throttle down. His plus power curveball can be a devastating out pitch. He also has an excellent feel for his changeup. Once he puts everything together, I can easily see him as a high-end three or four starter in a playoff rotation.”

Abreu will need more time to work on his craft in Trenton. But if he continues to stay healthy and starts to put the pieces in place, there’s no denying a spot in the Scranton/Wlikes-Barre RailRiders rotation will open up; after all, the team’s combined ERA in starts this year currently sits at an even 5.00.

While Abreu remains the one of the most highly-touted prospects on the roster, it was Deivi Garcia who stole all the headlines. The Yankees’ number four prospect made his Double-A debut against the Fisher Cats on May 1.

Garcia’s promotion was expected during the 2019 season, but not many foresaw it happening so quickly. The 19-year-old pitched in 17.2 innings with the Tampa Tarpons and struck out an impressive 33 batters while holding opposing hitters to a .215 batting average.

The good and bad were on display for Garcia’s debut with the Thunder. The good: 11 strikeouts in just four innings while largely overpowering the upgrade in competition. The bad: four earned runs on three hits and five walks while fighting fastball command.

“Garcia is a diminutive puppy; he physically reminds me of Pedro Martinez and Sixto Sanchez. He’s very athletic and boasts a solid three pitch mix, with his curve ball and change-up both grading out as above average pitches. He does struggle with fastball command and the pitch lacks life, which means he must spot it. He’s aggressive and is a competitor but I’m not sure he’s the top of the rotation pitcher that the Yankees are portraying him to be. I see him as a back-end starter with the potential to be a high-powered weapon out of the bullpen.”

It’s hard to predict Garcia’s future. The Yankees will have all the patience in the world to see if he can stick as a starter. But if the organization believes he can be of value at a higher level in a reliever role — and if all goes right — it’s not a stretch to say the teen could be wearing pinstripes as early as this season.

Even though there are two top tier prospects in Double-A by Yankees standards, the team remains littered with talent that can help the team in a multitude of ways.

Domingo Acevedo, a one-time top-10 prospect in his own right, seems to have found himself a home in the bullpen. “It just wasn’t working out [as a starter],” the scout stated. “But if he stays healthy – and that’s a massive if – the bullpen can be his mealticket.”

Then there’s a pair of righties in Trevor Stephan (“Physically, he’s everything you want in a pitcher”) and Nick Nelson (“He needs to figure out his command and delivery issues to make the jump”), who along with powerful first baseman Chris Gittens (“He’s putting everything together at the right time”) and slick-fielding shortstop Kyle Holder (“His glove has been Major League ready but I’m not sure his bat ever catches up”) represent the best trade assets in Trenton. While the Yankees have been able to navigate through their early season injury epidemic by finding incredible production out of their backups, it’s not a foregone conclusion it will last. If and when some of the “other guys” come back down to reality, names like Stephan, Nelson, Gittens and Holder can be used to acquire reinforcements for the home stretch of the regular season.

While proclaiming each player is on the right path to Major League Baseball, the road may not take them to the Bronx.

“Are they talented players? Yes. But they can help the Yankees in a different way – and that’s as trade bait.”

For fans and evaluators alike, Trenton may not be a hot bed for future major league contributors like it once was. But with a combination of prospects with high-upside and quality youngsters used for the trade market, the Yankees will still be getting bang for their buck, one way or another.