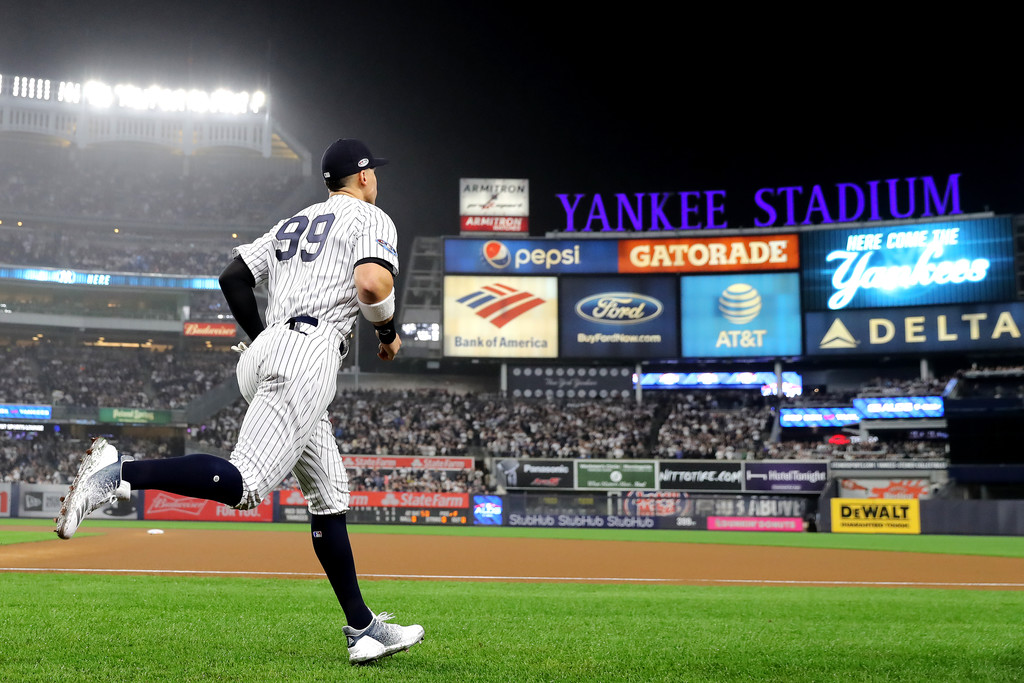 Where can you find the best baseball in the world? Fuhgeddabouddit! What kind of question is that, guy? On the east coast, moe. Deadass. Two beast coast born and raised kids bring you the goings-on from a week of baseball on the Atlantic. Welcome to East Coast Bias. ¡Dale!

Living up to the Hype

After the Yankees acquired then-reigning National League MVP Giancarlo Stanton before the 2018 season, fans were salivating at an M&M Boys reboot, a modern-day Bash Brothers with face-of-the-franchise Aaron Judge. But the duo has only played in the same lineup in 123 regular-season games out of a potential 324, leaving a lot to be desired, both as individual players and as middle of the order power bats.

While the pandemic-shortened 2020 season has been a whole new ballgame in general, the same can be said about Stanton and Judge and what they bring to the Yankees lineup on a daily basis.

Stanton traded in his superhero-esque physique for a more svelte look, and it appears to be doing wonders for the 30-year-old. Stanton has played in all seven games heading into Sunday night’s showdown with the Red Sox and has looked his best since putting on the pinstripes. His .469 on-base percentage is the best among all Yankees and his .320 batting average is good for second on the team. Not having fans boo you after a strikeout during a 1 PM start in May certainly helps, but Stanton is exuding a certain confidence that Yankees fans have yet to see throughout his career in the Bronx.

Judge’s numbers are just as impressive. He’s reached base at a 37% clip, just a couple of hairs away from his career .393 on-base percentage, and he’s hitting .290 through seven games. His 1.275 OPS is good for fourth among all hitters in the sport. He has a league-high six home runs, each of which he’s belted over his last five games, the longest streak in his career and the longest streak by a Yankee since Alex Rodriguez conquered the same feat in his MVP season back in 2007. Judge, like Stanton, looks completely dialed in during every at-bat and is becoming must-see TV each time he’s in the batter’s box.

This duo hasn’t been able to stay healthy together in the past. If they can – and that’s a decent-sized if – the dreams that occurred back in the Winter of 2017 may come to fruition throughout the summer and fall of 2020.

Are you kidding me? Each of his six home runs in 2020 has either tied the game or put the Yankees ahead. He did just that against the Red Sox on Sunday night, where he put his team ahead both in the second and eighth inning.

A Tale of Two Cities

The only comparison I can find between the Red Sox and Blue Jays is that they both play in the AL East.

The hiring of Chaim Bloom and the trading of Mookie Betts put out the bat signal for Boston fans, letting them know the rebuild was on. Unfortunately, Bloom had to follow the footsteps of Dave Dombrowski, who is notorious for selling the farm for a chance at World Series rings.

It worked in 2018. But when you fast forward two years later, the organization is left with a bare system and a future in flux. There are some positives – they locked up stud shortstop Xander Bogaerts for seven years, Rafael Devers’ defensive improvements may make him one of the best all-around third basemen in baseball, Andrew Benintendi has flashed serious upside and Alex Verdugo, the main return in the Betts deal, is 24 with a ton of potential.

The entire pitching staff, meanwhile, leaves a lot to be desired, and that doesn’t seem to be changing anytime soon. Bloom is one of the best men to take this tall task on, but he’s going to get his money’s worth in doing so.

North of the border is just about the polar opposite of their US counterpart.

The Blue Jays made history in the early days of the season when their entire starting infield was made up of second-generation players – Vladimir Guerrero Jr., Cavan Biggio, Bo Bichette and Travis Shaw. While Shaw is what he is as a major league player, the sky is the limit for the other three.

Guerrero Jr. took MLB by storm when he came into the league a season ago, as he showcased raw power with a marketable personality. Bichette fits the word electric to a tee, with his ceiling being the total package at shortstop. And while Biggio was overlooked due to the aforementioned duo, he’s taken on the role of clubhouse leader despite being 25 and has found success on the field in his own right.

It doesn’t stop on offense. Nate Pearson was regarded as one of the top pitching prospects in baseball before his promotion this year. Sean Reid-Foley and Anthony Kay possess upside. Lourdes Gurriel Jr. and Teoscar Hernandez have youth on their side. Their farm system is robust.

There’s a lot to like about the Blue Jays – unless you’re the Yankees, Red Sox, Rays and Orioles, of course.

The Orioles are 5-3 going into Monday (I’m sure there are some out there who bet the Orioles wouldn’t win five games this season) and one of the biggest reasons is due to the bat of José Iglesias. Despite dealing with quad issues, he’s slashing .471/.471/.706 in 17 at-bats and is tied for a league-high five doubles.

In (only) the first week of the season, the Marlins, Phillies and Nationals lost games due to the coronavirus. With the Orioles, Blue Jays and Yankees missing games as well, the epicenter of MLB’s catastrophic opening week is in the east. The Marlins are dealing with a full-blown outbreak. The Phillies have lost games, too. The Nationals have been without their most important hitter, Juan Soto, for about 1/10th of the season so far.

Travel was always the most suspect part of MLB’s restart plan, and the schedule seems to have been devised with containment – not prevention – in mind. As the NBA and NHL restart their seasons in isolated bubbles with no recent positive tests, MLB’s less restrictive, region-trotting approach virtually guaranteed exposure.

As it is, records in the east are wacky and imbalanced, and proposed doubleheader dates are filling up the remaining days of this franken-season. Teams were given 66-67 days to play 60 games. More than half the east will try to play a ‘full’ slate in even less time.

A typical Mets season includes a lot of suffering mixed with regular doses of bizarre headlines. The Mets are cramming as many greatest hits as they can into the shortened 2020 campaign.

On the field, New York’s bullpen continues to be a disaster unit. The Mets have led in the 6th inning or later in three of their seven losses to start the season. Six relievers have a negative net win probability, and the pen is a bottom-10 group in high leverage situations. They’re 30th in percent of runners stranded.

The offense hasn’t helped: though New York’s lineup is racking up hits, they’ve been downright awful in run-producing scenarios. Yoenis Cespedes was part of the problem. On Sunday, he opted out of playing the remainder of the season, citing COVID-19 concerns. How it unfolded was a Mets fan’s prescribed dosage of the unusual.

Cespedes vacated his hotel room and apparently didn’t inform team leadership of his decision before leaving. The Mets released a statement effectively announcing they didn’t know where he was, which was both frightening and shortsighted.

In the end, Cespedes was okay, per his agent, and his departure was deemed for “COVID-related reasons.” This likely marks the end of Cespedes’s run in Queens, with his contract up at the end of this season. Cespedes’s tenure peaked when he first got to Flushing in 2015 and played a major role in leading the Mets to a National League pennant. It’s been a rocky relationship since, and the end was near. How the Mets and Yo got there was, well, characteristically bizarre.

During one of baseball’s off-seasons, rumors spread that Ronald Acuna Jr. was going for a 50-50 season. Acuna hype erupted, investors started buying up his baseball cards and the Braves were expected to convert the promise they’ve been accumulating over the last few seasons into a title.

Before hitting a solo shot on Sunday, Acuna opened the season .184/.262/.604, striking out 43% of the time. He was one of the 10-worst players in baseball by fWAR. Yet the Braves are a healthy 7-3 and sitting atop the NL East while fielding a top-half offense despite the struggles of Acuna and fellow franchise cornerstone Ozzie Albies.

Also during one of the off-seasons, the Braves added Marcell Ozuna. Once a promising member of a Marlins outfield that also housed two league MVPs, Ozuna spent the last two seasons adrift in St. Louis, where he never came close to matching his peak with Miami. When he was traded to the Cardinals before the 2018 season, I had Ozuna pegged as a future nine-figure outfielder, along with former mates Christian Yelich and Giancarlo Stanton. But when he signed with Atlanta on a one-year prove-it deal, it wasn’t a surprise.

Ozuna is hitting .324/.439/1.115(!) with 3 home runs, 6 RBI and 8 runs to start the year. He sits top-10 on weighted runs created, fWAR, and net win probability leaderboards. He’s walking more, striking out less, and although he’s benefitting a ton from short sample size and luck (evidenced by a .400 BABIP as of Saturday), he looks closer than ever to the dominant potential he flashed in Miami. During opening weekend, he saved a game for Atlanta with one strike to go:

Dansby Swanson has been his equal, a little less so on offense but still very valuable in the field at a premium defensive position, and Didi Gregorius is crushing baseballs for his new team. But I’m going with Ozuna here, who has done more than his share to keep Atlanta’s lineup strong as it waits for its key bats to get going.