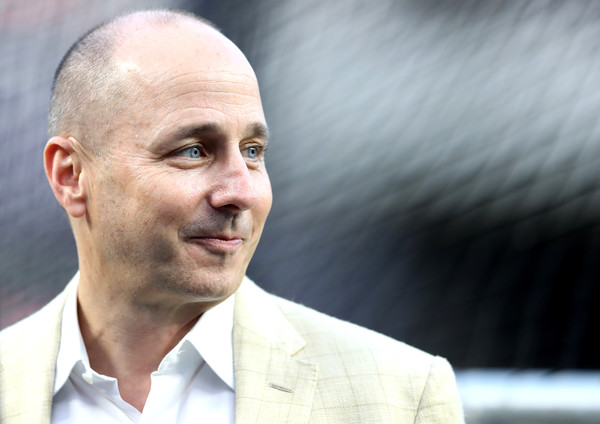 The most glaring name, to me anyway, was one that wasn’t there at all: Estevan Florial.

Florial became the new face of the Baby Bombers over the last two seasons, like Aaron Judge and Luis Severino and Gleyber Torres in years past. The Dominican native sat atop a number of Yankees prospect lists, including MLB Pipeline, as well as ranking second for Baseball America and Baseball Prospectus, thanks in large part to his physical tools, Gold Glove-caliber defense and blazing speed. Injuries, a 33% strikeout rate, batting average of .237 and OPS of .680 across 301 plate appearances in 2019, resulted in a repeat season at High-A ball, an uncharacteristic and disappointing outcome for both Florial and the organization.

Florial’s omission speaks clearly to what he has (or hasn’t) become.

But there is a larger question than just Florial and his future with the Yankees. It’s about Brian Cashman, his prospect hugging and pulling the trigger at the right time.

Now if you ask me if the Yankees GM is a prospect hugger, you’d get a different answer than if you scour Yankees Twitter for a minute or two. There have been moves where Cashman could have made a move in hindsight (Gerrit Cole for a package centered around Clint Frazier and Miguel Andujar quickly comes to mind) but, by and large, he’s had no problem trading from the farm system for major league talent.

Look back on the deals to bolster the rosters from the 2017 season to present day.

Blake Rutherford was drafted by the Yankees in the first round of the 2016 draft and slashed an eye-popping .351/.415/.570 in 33 rookie ball games that year. He continued to impress the following year with the Charleston RiverDogs, where he batted .281 with an on-base percentage of .342, and climbed numerous prospect boards in a loaded farm system. Rutherford headlined a package that was sent to the Chicago White Sox in return for Todd Frazier, David Robertson and Tommy Kahnle in July of 2017.

Just two weeks later, Cashman put together a package of three top 15 prospects for Sonny Gray. It included James Kaprielian, who was another first round pick of the Yankees and was, according to one source, “on the fast track” to the Bronx before Tommy John surgery ended his season. Jorge Mateo had a .906 OPS in Double-A, was a top-five talent in the system and viewed as the heir apparent to Derek Jeter. Dustin Fowler, who flew under the radar until he slashed .293/.329/.542 while playing a strong center field across 70 games in Triple-A.

The theme continued over the next two years. Infielder Chris Drury came from the Diamondbacks in a three-team deal that involved two top-15 prospects in Taylor Widener and Nick Solak. Dillon Tate, Cody Carroll and Josh Rodgers – three pitchers frequently mentioned as impressive arms in the system – were packaged for Zack Britton.

Even Justus Sheffield, boasted as the Yankees’ best pitching prospect, was traded for James Paxton. And I’m not even mentioning smaller deals, like the ones involving Jaime Garcia, J.A. Happ, Edwin Encarnacion, amongst others.

Cashman hasn’t been perfect. He could’ve sold high on Florial, or Chance Adams, Tyler Wade, to name three. Some of the aforementioned transactions didn’t work out as planned. But these trades alone at least demonstrate the front office’s appetite to give up young players when needed.

And that theme must continue to get this team to their 28th World Series.

Do the Yankees have one of the best rosters in baseball heading into next season? Are they ripe with talent at nearly every position? Yes and yes.

Can they also use upgrades? Also yes.

Let’s start with shortstop: Didi Gregorius has enjoyed a fantastic Yankees career and means just as much off the field as he does on it. But he got on base at just a 28% clip and saw his defense regress in an injury-shortened contract year. Could the Yankees re-sign him to a one-year, prove it deal? Sure. But another team could give him a multi-year contract, leaving a vacant spot in the infield. It would be malpractice if Cashman didn’t reach out to the Indians about Francisco Lindor or the Dodgers about Corey Seager to upgrade the infield.

The same can be said for the hot corner. Gio Urshela was a revelation both offensively and defensively at third base in 2019 but it wouldn’t be unfair to expect regression from his robust .314/.355/.543 stash line in 476 plate appearances. Urshela is cheap, which plays into his favor. There’s also Miguel Andujar, who is recovering from shoulder surgery and, despite his defensive deficiencies, still had one of the better rookie seasons in recent memory. But the Cubs are looking to break up their core, and Kris Bryant’s name has been floated in trade talks. He’d be someone that can deepen one of the deepest lineups in baseball even further.

The rotation, too, needs help. Eyes are fixated on Gerrit Cole and Stephen Strasburg, and even Zack Wheeler and Madison Bumgarner. But Matthew Boyd, Jon Gray and Robbie Ray could be cost-friendly additions, something Cashman loves to work with.

The Yankees have what it takes to get any of the aforementioned players, from Ray to Lindor. Florial has the intangibles that teams crave and is just 21 years old. Garcia has followed in the footsteps of Severino, Kaprielian, Adams and Sheffield and is known as the top pitcher in baseball. He was good-but-not-great in 2019 but did advance from A-ball all the way to AAA while striking out 165 batters in 111.1 innings along the way. Pitchers Albert Abreu, infielders Thairo Estrada and Kyle Holder, as well as catcher Josh Breaux, will be names in the farm system that could be of value to bolster trade packages.

And don’t forget about some Major League talent. Andujar was seen as a cornerstone talent just two years ago when he slashed .297/.328/.527, surpassed Joe DiMaggio for most doubles by a rookie in Yankees history and was the runner up for the 2018 American League Rookie of the Year award. Frazier is as eccentric as they come and has proved he can hit at the MLB level. Tyler Wade may be lacking in said hitting department but his defensive versatility, speed and upside can entice a number of teams.

The past shows this organization doesn’t prospect hug. They have the necessary pieces to get players they want – and more importantly, need.

Now is the time to pull the trigger once again.