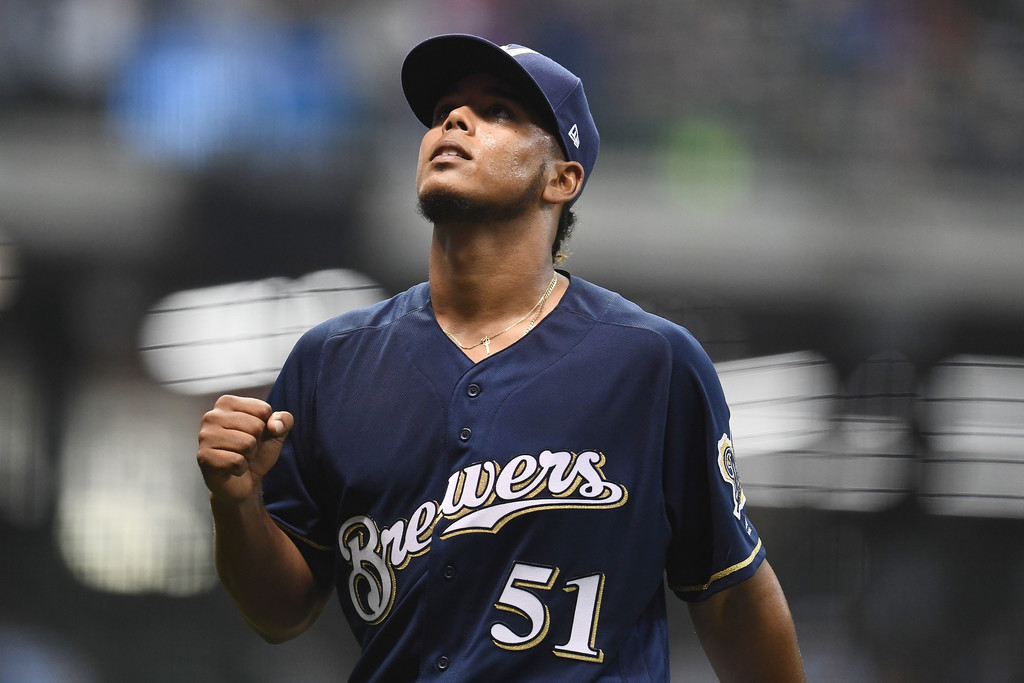 Freddy Peralta was named the de facto #2 starter for the 2019 Milwaukee Brewers. After three starts and the expanding sample size, is it time to wonder if the Brewers expected too much from their promising young hurler?

This isn’t Victor Santos or Wes Obermueller or Glendon Rusch getting trotted out there and hoping for the best. Peralta is a promising pitching prospect with significant upside, as evidenced by his sparkling lockdown of the Cincinnati Reds a week ago. But when things like Tuesday night happen, in addition to his fateful March 29th start against the St. Louis Cardinals (the Goldschmidt Derby), it’s natural to wonder if perhaps he was hastily thrust into a place of prominence.

The raw numbers aren’t encouraging. In his two losses, Peralta has only gone three innings each, threw 80 and 92 pitches respectively, faced 38 batters and gave up three home runs, or roughly one every other inning. His more advanced metrics are foreboding: BABIP against is .500, an OPS against of 1.258 and while his FIP is in the black, it’s only because his ERA is bloated.

The 22-year-old, who has a good fastball, is also abandoning his second and third pitches, if Baseball Prospectus and Brooks Baseball’s data are any indicator. To be fair, Peralta is in essence a two-pitch guy: fastball and curve. He has a change, but seldom uses it. Fastball usage in his two April starts is up over 80%, while the curve is down almost two full percentage points, the change just under one; a trend accelerating since his debut start. Hitters seem to be picking up on this, bailing on the offspeed stuff and timing up his fastball.

If this sounds familiar, it’s because it is: Chase Anderson had similar problems last season. Ben Sheets also gave up on his non-hard, non-curve stuff as injuries and overuse slowly claimed his career. Peralta not a partially-baked, rushed top prospect as Sheets once was, nor is he the scrapheap/project acquisition Anderson was. But it does appear that Peralta’s rise to the second spot in the rotation is too much, too soon.

As Craig Counsell noted before the season, it was time to place trust in the young pitching troika of Peralta, Brandon Woodruff and Corbin Burnes. With Anderson unable to show demonstrable signs of putting 2018 behind him and returning to his 2017 form, Jimmy Nelson and Brent Suter on the shelf and Zack Brown still promising but also still a work in progress, this made a lot of sense. Peralta performed admirably in 2018, though signs of some regression were beginning to show as the season ended and his one October appearance looks eerily like the start to his 2019.

Some of this might be on Yasmani Grandal, a pitcher and new catcher still working out the quirks. After all, Peralta’s gem in Cincinnati came with Manny Pina as his familiar battery mate. But Grandal represents a massive upgrade at the plate and the Brewers can’t sacrifice offense, especially when Travis Shaw and Jesus Aguilar are struggling at the plate (both of whom, in addition to Orlando Arcia, I profiled before the season as keys to the 2019 Brewer offense.)

In reality, Peralta probably should have been the three starter behind Woodruff, or fifth behind Zach Davies, who has exceeded expectations thus far. But that’s admittedly playing the worst kind of Monday morning quarterback. When Nelson returns, he could assume that spot behind Jhoulys Chacin and Peralta can get more seasoning at Triple-A. Two-pitch starters simply can’t and won’t succeed in the analytics era; he needs to be able to throw the change with confidence and, with the team legitimately in contention for a pennant, the Brewers can’t have a guy learning on the job. That’s how guys like Sheets stalled in development, and I’d like to think David Stearns is more savvy with player management than Doug Melvin was (out of necessity or otherwise.)

It’s too soon for us to be raising the red flag on the Brewers’ campaign. They’ve scuffled in Anaheim but otherwise have shown the ability to compose themselves and won each of their first three series, all against divisional opponents. There is no question they’ve been handed a tall order in the first month (and the second is also shaping up to be formidable.) To survive and position themselves well for October baseball, they need to minimize the kinds of outings we’ve seen from them on these late Midwest nights. And if that means giving Freddy Peralta time in San Antonio to continue developing into a viable, long-term starter, that’s a decision that will need to be made.

To wit, what Peralta has provided twice in three outings is not worse than what Anderson or Junior Guerra can do and have done. With pitching prospects not yet ready, injuries limiting Stearns’ options (Nelson is reportedly out for at least another two weeks), and Woodruff and Burnes representing a calculated risk-reward proposition, it may be of use to flip Peralta into the pen for either aforementioned long reliever. There’s just too much upside still there for Peralta to keep getting destroyed like he has been.

For the reasonable Brewers fan, there is no reason to sell the Brewers short right now. The season isn’t even two weeks old and they’ve already taken it to three divisional contenders. But there are adjustments that will likely need to be made to remain successful and competitive; it is increasingly clear that getting Freddy Peralta out of the rotation represents consideration for both the short- and long-term.

3 thoughts on “Too much, too soon”