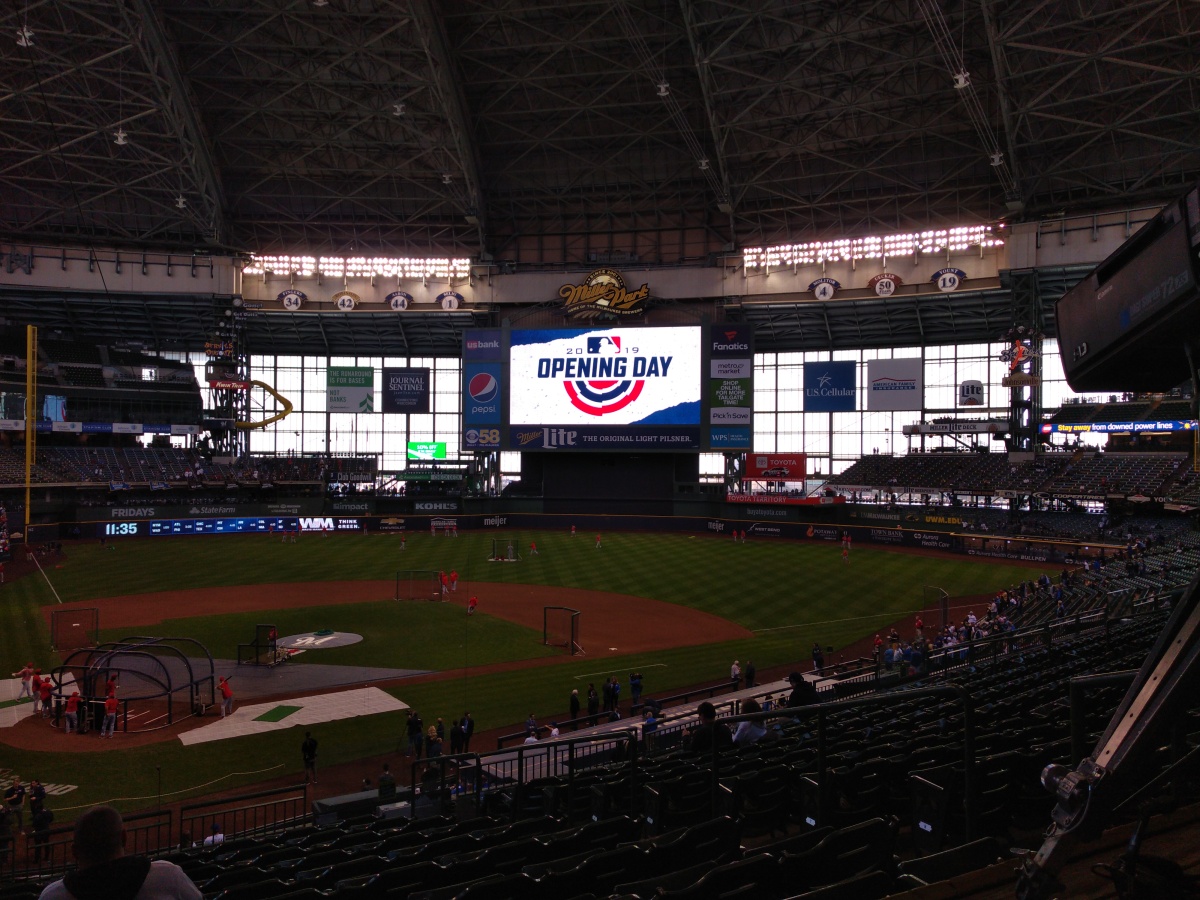 When you’re handed tickets to Opening Day out of nowhere, principles go out the window.

Opening Day is for poseurs. Amateur hour. The day when you’re not high-fiving anyone because you don’t know how recently that bro in the Tony Plush t-shirt and blue and gold beads may or may not have puked.

At the risk of understating the obvious, I already had machinations on getting to some games–tonight, in fact, I will be at Miller Park–but when I was at work earlier this week and someone walked up to me and handed me two tickets figuring I’d use them before she ever would, and then I saw the date for them, I had a momentary pang of conscience. Do you really want to go to Opening Day?

Like I said, it was a moment. The next moment, I had put in my request for the day off and began trying to see who could/would come along.

My wife had just returned from a trip out of state. I couldn’t bring one of the kids and I wasn’t sure I wanted my kids to be around the vaunted, infamous Milwaukee Opening Day crowd, well-known for its lubrication and rowdiness. The other Brewers writer on this site was unavailable (which, to this day, beggars belief.) My dad was busy, which I don’t entirely understand how a retiree can be busy, but OK. A few other options fell through.

Thursday morning came, and I was resigned to the fact that I was flying to Miller Park solo. A pleasant morning drive down I-41 with myself and my thoughts and a hearty breakfast later, I was en route to the ballpark.

For those of you who aren’t in the Upper Midwest, it’s tough to really put into words how hard this winter was on us. Yeah, yeah, hardy Midwestern stock, blah blah blah, we got pounded with snow and cold for two solid months. It wasn’t fun. The worst pile-up in Wisconsin history happened last month just south of my home. The snow banks were at one point as tall as I am.

Baseball’s Opening Day, for those of us in flyover country, isn’t just the commencement of a hobby; it’s the herald of better weather and the ability to go outside without having to bundle up. Open windows, grills, the radio airwaves chasing the sun into the west. Football keeps us warm on cold autumn nights; baseball is the cool breeze of a summer day.

And Thursday was one of the nicest weather days we’ve had in Wisconsin yet. An unusually warm day soaked in sunshine. It was no surprise to leave Story Hill and look down on the Miller Park parking lot, filled with cars and smoke from countless grills filling the air. Just beyond, the arcing, distinctive roof of the home of the Brewers.

As I normally do, whenever I first get there, I get the tinglies.

Suddenly, I didn’t feel so alone. As I was ushered to my parking spot, I wasn’t by myself anymore. I was surrounded by 45,000 of my closest friends, all more than ready for baseball.

The lines had not yet built up outside the stadium, what with all the revelry taking place off people’s tailgates, I was able to breeze through security and soak in that experience of entering the concourse. I like that.

My seat was up in the nosebleeds (‘Terrace Reserved’, they call it, though it’s neither terraced nor reserved), not far from where I was when I was there last October for NLDS Game 1. I mentioned to the section attendant that I loved that the Brewers didn’t have to take down the bunting from last October. He didn’t follow, but he did express his significant reservations about the team’s chances this season.

I wandered the concourses again, as fans began to fill in the stadium, the smell of roasted nuts and sausage and barbecue filling the air. Checked the pro shops, which the Brewers have gone to lengths to note now featuring lower prices after taking over sales operations from a vendor. (The verdict? Marginally better prices, nothing shocking.)

And we had the festivities that come with an Opening Day. Members of the Attanasio family singing the anthem, the gigantic flag held across the field.

And first pitch. In a few seconds’ time, we were carried across the threshold, from the anticipation of a new baseball season to the beginning of a six-month marathon.

There really isn’t a bad seat at Miller Park (Uecker seats excepted.) The sightlines are great and you never feel like you’re not a part of the action. The poorly-kept secret, though, is that there are rails and bar-tops available throughout the 200 level and significant parts of the 100 level concourses. You can buy an upper deck ticket and spend the game leaning on a bar significantly closer to the action. I left the upper deck and went down to 200 level, where I happened upon a pack of bros who vacated a part of the bar along the first base line.

That was when Kolten Wong and Harrison Bader went back to back. Also, this happened.

The bro next to me is shouting loudly that his companion 'has gotta be at Fridays' and pointed down the right field line.

He may or may not be a little tipsy.#Brewers #OpeningDay amateur hour.

I texted an old friend of mine who was also at the game and we met up down the left field line behind the loge. From there, Christian Yelich put the Crew out in front, Jhoulys Chacin deposited a flyball into the Brewers bullpen and, eventually, Josh Hader blew the Cardinals away, with Lorenzo Cain locking the game down in dramatic fashion.

After the game, a very happy bro began talking to me about the game as though I wasn’t there, proffering thoughts on Giannis Antetokounmpo and Aaron Rodgers and Ryan Braun being MVPs all at once and giving me his expert analysis on the team this season. He probably doesn’t remember that conversation having taken place, but he was happy. So was I.

It took an hour to even get away from the Menomonee River valley. I grabbed my George Webb burgers (five runs, five burgers, five bucks; I, like most Wisconsinites, appreciate a good deal, though less so than most) and made my way north and back home.

I still wouldn’t bring my kids to an Opening Day. But I’m glad I let my principles go up in charcoal-scented smoke. There is no such thing as a bad day at the ballpark.

And I can’t wait to hit the road in an hour to do it all over again.