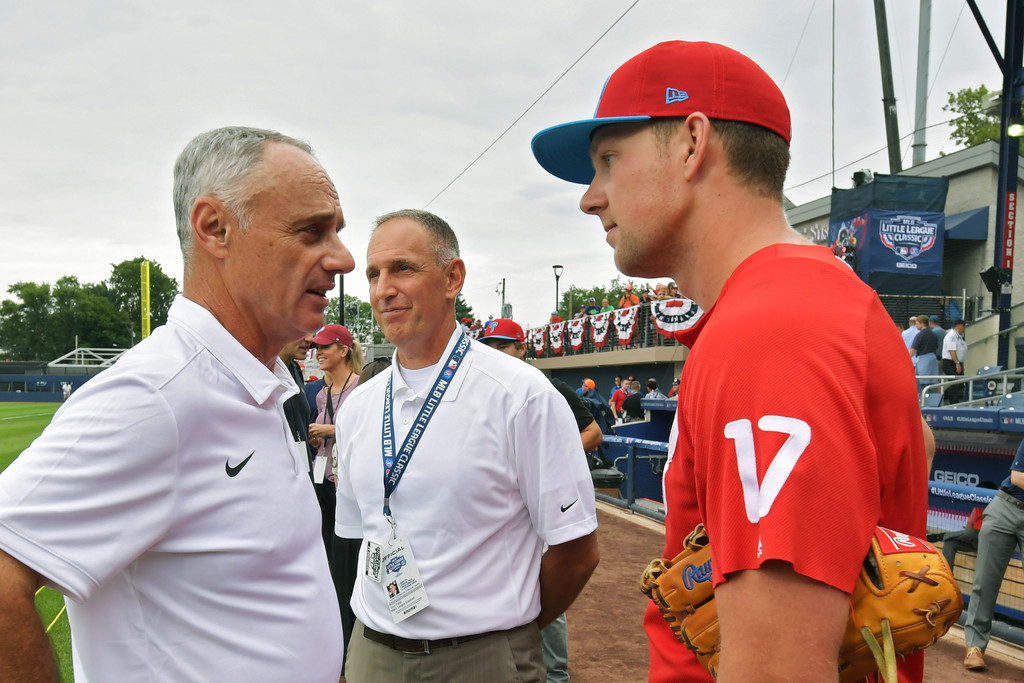 In commemoration of the impending [stateside, at least] Opening Day, the BtB staff is pleased to present Nine Innings, a series of posts on, about or tangentially related to the game. Today, a look at the game, and MLB’s thirst for fixing what may or may not be broken.

First Inning — Awash in record revenues, coming off a postseason capped with featuring two of the largest and most-passionate legacy baseball markets, and with half the teams in the league legitimately positioned to contend for even a cameo appearance in October, baseball commissioner Rob Manfred isn’t content.

Rather than address many of the real issues pressing the game: labor unrest, the increasing costs of attending and experiencing a Major League game, a clear disparity between minor and major league player pay, unaccountable, incompetent umpiring with an opaque, even-more-unaccountable replay system, Manfred appears to be more concerned with pitch clocks, changing the dimensions of the field of play, instituting the universal DH and banning shifts, to name but a few.

In short, Manfred’s actions and apparent desires signal that Major League Baseball is majoring in the minors.

In chasing MILLENNIALZ, MLB does itself no service by trying to align itself with its other American professional sports leagues. The pitch clock does nothing that doesn’t already exist in the rulebook. Moving the mound back may be a hydra’s head, along with the added bonus of further taxing pitchers’ arms. The universal DH is stupid, and the AFC/NFC corollary doesn’t quite fit. Minor league players are paid worse than the kids working at your local Burger King. The dire state of umpiring is getting a bone thrown at it in independent ball, when a Hawk-Eye type system could pretty easily be implemented as a check on quality both in real-time and in more substantive evaluation of umpire performance. The NBA’s replay system, which allows the crowd to see what the Replay Center sees, apparently is too much to ask.

If some idiot manager wants to put six guys on the left side of the field, let him. And then let him have it on Twitter.

The question no one is asking is really fairly simple: What if Manfred is wrong?

What if baseball’s appeal is precisely in its stodginess? What if baseball is loved because it is a pastime, a game unto itself and apart from its time-constrained contemporaries?

Nearly everyone I know–and probably everyone you know, too–doesn’t have a problem with going to a game. People have a problem with watching the game. To be sure, I disagree with this proposition for any number of reasons, but the pastime doesn’t seem to translate on a random Tuesday night in May; October, though, seems to be another story. It’s the same game, just with higher stakes. Regardless, it’s the same game.

So, when we see these camera angles coming from games and social media erupts, I begin to wonder, well, exactly what I’m wondering right now. The game is in good shape (as long as labor and management doesn’t botch this up), talent has never been stronger in the modern era (Mitch Haniger is the truth, y’all), most fanbases are pretty fired up about their teams (even long-suffering Reds fans!) After all, this is the end of Spring Training; hope springs eternal this time of year. But the game qua game? It’s really not in bad shape.

Why are we trying to fix what’s not broken? And why aren’t we as devoted fans evangelizing baseball and championing its beauty? I mean, really, have you tried sitting through an NFL game without fantasy football?

No, the problem is us. Viewers, used to the punctuated violence of football and the constant hyperactivity of basketball, are dropped into a game and it’s a different gear from the blipverts endemic to television and modern life. And yes, baseball is tailor-made for radio, but there are ways we can transform the telecast, and not in that dizzying, schizophrenic way ESPN likes to fabricate ‘experience’. Own the distinct nature of the game. Embrace its timelessness. Find creative ways to immerse the viewer in the ballgame.

Ump cam is a great start. Manfred’s surgery-with-a-sledgehammer proposals? Not so much.