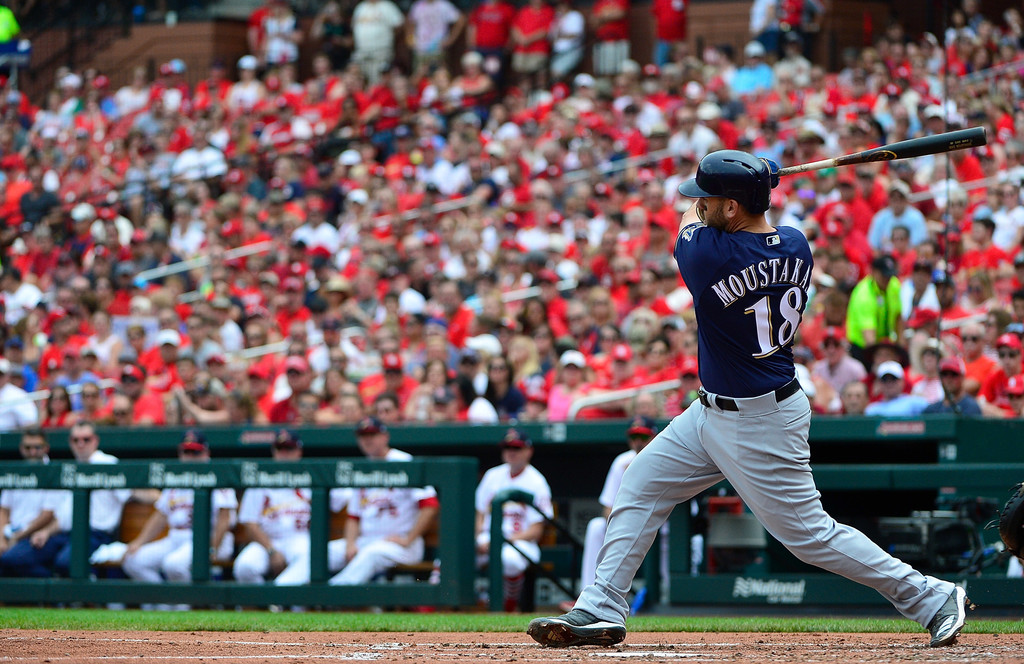 For Mike Moustakas, returning to the Milwaukee Brewers will be familiar territory—but it certainly won’t negate the potential for unfamiliarity.

On the surface, the team may look quite similar to the 2018 roster that pushed to just a win short of the Fall Classic, but even manager Craig Counsell attempted to eschew having anyone—fans, players, pundits or otherwise—coming into 2019 with similar, let alone higher, expectations. And it seems that may apply player-by-player as well.

I consider this a hint as to where Mike Moustakas will play with #Brewers: Travis Shaw just said he expects to play third base.

It was clear going into the offseason that there was a need at second base. But like many have now come to know about the Brewers’ front office, the team-building approach is nothing less than unconventional. Then again, for anyone familiar with how GM David Stearns operates, the recent agreement with Moustakas ($10/1-year with a mutual option for 2020) and pending trial at second base is certainly in the wheelhouse given Stearns’ love for flexibility—even if it’s introduced in Spring Training to tenured players with limited or no experience at certain positions.

For anyone who watched a fair amount of Brewers games last year, that experiment isn’t new for either the team or its players: Counsell frequently tinkered with the traditional bullpen and starting roles, as well as optimizing nearly every game, let alone inning, to accommodate splits both in the lineup and in the field, taking liberties with young and tenured players alike.

Travis Shaw, who spent the majority of his baseball career at third base, endured the transition to second just last season, incidentally, to make room for Moustakas when Milwaukee acquired him at the deadline. This year, however, it seems the narrative has been reversed and could pay similar dividends on both sides of plate.

That’s not to say the Travis Shaw at second experiment was a failure. In fact, despite having a somewhat uninspiring range, Shaw fielded the position fairly well, committing only one error in 39 games and finishing the season 10 points above the position’s league average in fielding percentage.

Like Shaw, Moustakas will be coming in with extremely limited experience at the keystone, yet both the front office and managerial staff seem convinced his defensive abilities will play nearly as well as they did at the hot corner—and his numbers there certainly bear out. Should they fail, the team will likely lose little more than Spring Training prep time, as super-utility man Hernan Perez is still a potential sub and Shaw will already have the experience to endure the switch back if necessary.

Should they succeed, however, they’ll not only have one more experienced player to move around and more time for their duo of top-tier middle infield prospects in Mauricio Dubon and Keston Hiura to get footholds, but will likely help Moustakas’ market value come 2020 or 2021, depending on how the two sides proceed with the mutual option.

The deal happening in the first place, let under under the conditions, also seems to hint at something else: comfort. Moustakas reportedly turned down multi-year deals to return to Milwaukee after spending just under a half-season as a Brewer, and at an unfamiliar position at that. Rumors that the two parties had been circling back started as early as the day after that fateful NLCS Game 7, but it appears that neither was fully convinced until more of the market shook out. Regardless, after his physical on Tuesday, the ink on paper should say all it needs to about the state of the market or, maybe more importantly, the perceived value that both teams and players place upon each other—that is, if the trend of paying up and out continues to die, whether players will begin to more frequently gravitate towards winning or boosting their value on prove-it deals than they do towards a guaranteed and potentially compromised payroll.

But that value also goes beyond salaries and stat lines. Based on the reaction in the clubhouse, it seems that Moustakas’ personality brings as much value as his leadership and experience, which could be a huge boon to team rich with young talent, many of whom are still, at times, grasping for the rope.

Given the near-career-year Moustakas experienced in 2018, especially on the heels of an All-Star 2017 campaign, and his postseason experience, there’s little doubt that he will find a way to fit into the lineup on a regular basis regardless of who is on the mound. Considering that he will have a year to continue enjoying the transition from a balanced park to a hitter’s paradise with some experience at the latter already under his belt, the chances are good that he may help boost the team to one of the league’s best offenses.

Whether or not Moustakas is able to supply healthy defense at the new position remains to be seen. Regardless of where he ends up, his bat will play with significant fanfare.

Jonathan Powell is a co-founder and lead writer for Bronx to Bushville.