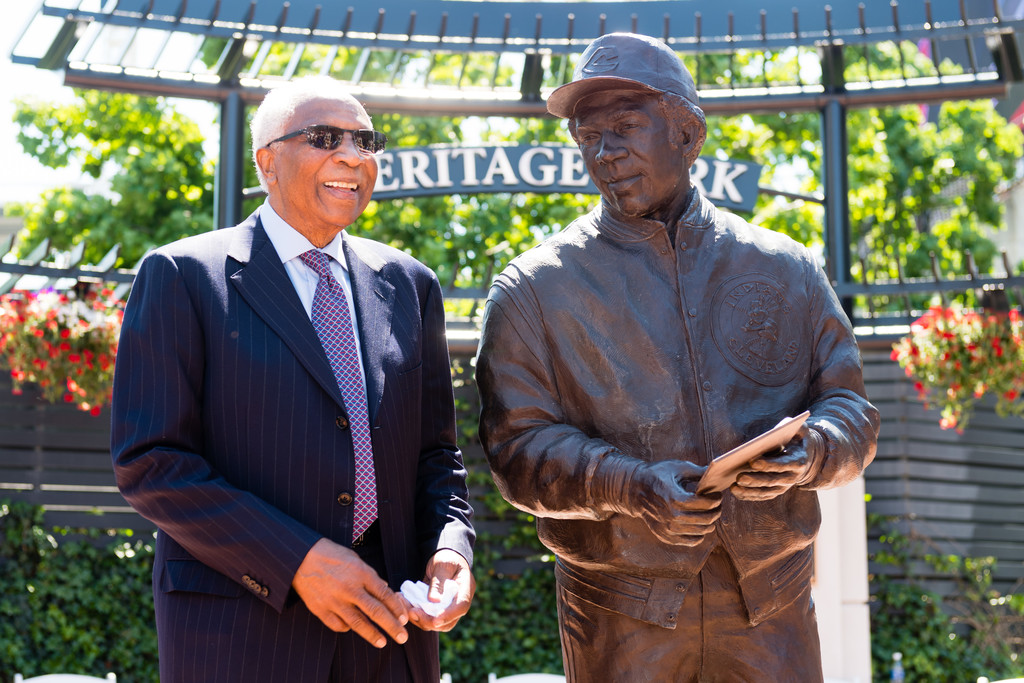 It’s difficult to write an obituary of sorts for a ballplayer one didn’t see. Frank Robinson was already in his first season as manager of the San Francisco Giants when  I was born.

But I recall visiting my grandparents’ house in rural Minnesota as a boy and happening upon that mythic shoebox of baseball cards in the dresser of a spare bedroom. In it, amongst other cards, was a Robinson card from his time with the Orioles. I knew Tom Seaver and Nolan Ryan. I didn’t know Frank Robinson. I showed them to my older brother, more attuned to the world of baseball cards than I would ever be, and he was shocked.

Robinson, who played in the shadow of Henry Aaron and Willie Mays, was the slugger to Roberto Clemente‘s hitter (though Robinson himself was no slouch at the plate, amassing 2943 hits to go along with his 586 home runs). Both Robinson and Clemente were clearly a step above other exceedingly-respectable contemporaries like Vada Pinson or Tony Oliva.

Robinson, though, is the one with a bWAR of 107, good for 15th all-time. When he retired at age 40 in 1976, his 586 home runs was good for fourth in baseball history behind only Aaron, Babe Ruth and Mays. Even with the intervening years bringing changes to the game, his 586 still stands as tenth-most in history. Though he was passed in the rankings by modern legends Ken Griffey, Jr., Jim Thome, Barry Bonds and Albert Pujols, none of them come close to Robinson’s raw impact on the game. Somehow, that impact is largely forgotten.

That impact is also impressively widely spread, rippling through baseball as well as in society beyond foul poles. Robinson played with a ferocity that belied his brilliance and was notably amongst the first African-American ballplayer to have not first played in the Negro Leagues. During offseasons in Cincinnati, he took courses at Xavier University. He became notable as ‘The Judge,’ a show trial scheme that underscored his deep, often ascerbic passion for winning. The combination of having grown up African-American in the Bay Area pre-Civil Rights era and having studied in a Jesuit school clearly gave birth to a powerful social conscience when he spoke of racial issues in Baltimore while with the Orioles.

The line may not be clearly drawn from Jackie Robinson to Larry Doby to Frank Robinson, but he was no less a force on and off the field.

And even in this age of tape-measure dingers and differently-wound baseballs, it’s still pretty unusual to hit 586 homers. It’s unusual to play 21 seasons. It’s also unusual to have put up All-Star and Hall of Fame-caliber numbers in an era of all-time ballplayers and be traded four times at about sixty cents on the dollar.

Also notable: Robinson did most of his damage before the mound was lowered after 1968. He performed better when the pitchers had the on-field advantage.

And perhaps this is the best metaphor for Frank Robinson: he was at his best when he had no choice but to be, the forgotten man who leads the charge. And, for that, we’ve let him down, because, “I don’t want people to say Mickey Mantle, Willie Mays and Hank Aaron in one breath and, in the next, Frank Robinson. I want them to say Mantle, Mays, Aaron, and Robinson in the same breath.“ And we don’t.

As he did during his career, it seems Robinson judged us all as we went gaga over the Bondses and Griffeys who came after and are no less indebted to him as they would be the more celebrated post-integration pioneers.

There’s no reason for us to not include Robinson, beyond the fact that we’ve plain forgotten him in the conversation of legends. Like a shoebox of baseball cards in an old spare bedroom, he’s begging to be rediscovered.