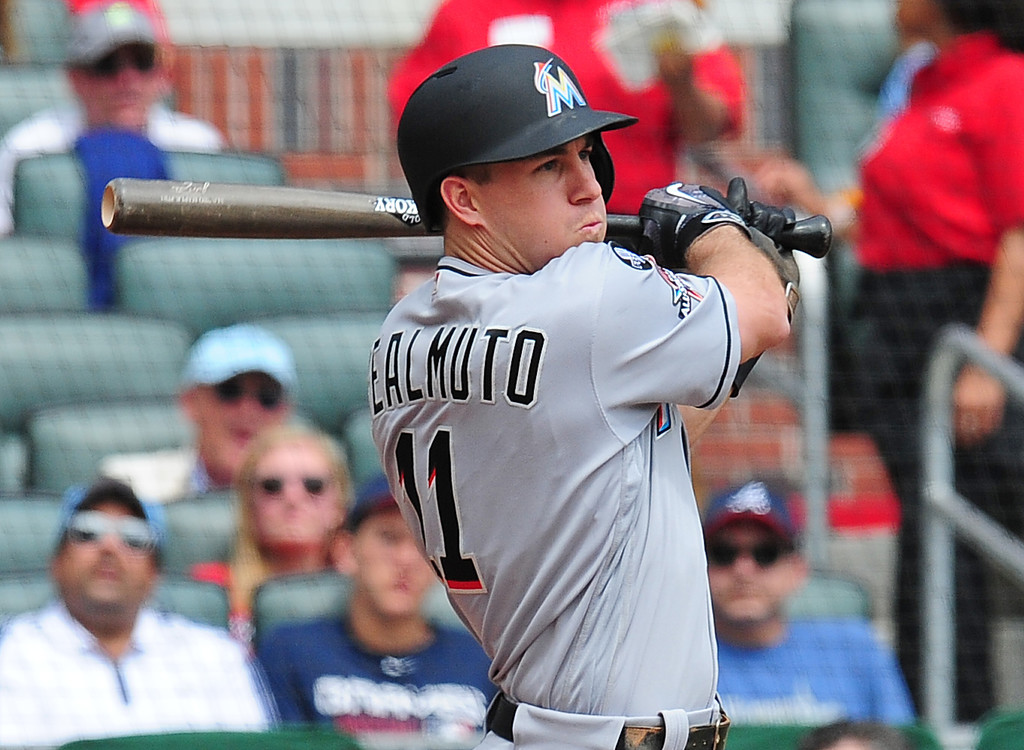 The Philadelphia Phillies snagged the former Marlins catcher and dramatically improved their lineup. They paid a steep price, but it’ll be worth it in the near-term. Especially if the biggest prize is still to come.

One of the benefits of having little time to write quick takes as the news breaks is that it gives thoughts a chance to evolve from their single-celled hot take form into something better developed a few links later. That’s what happened with my opinion on the J.T. Realmuto trade to the Philadelphia Phillies. It’s changed considerably from the time the deal was reported.

My amoeba take was that the Phillies paid quite the price for Realmuto. Realmuto is probably the best near-sure-thing catcher in baseball and was better than every other catcher available in a winter of available catchers. Philadelphia upgraded a position that needed upgrading with the optimal option. Not just “best available” but possibly “best overall.”

It cost them Sixto Sanchez and more in a trade environment where other suitors weren’t keen on including high-end prospects/young players for Realmuto. The Mets allegedly stalled when rumored packages included, in some combo, Brandon Nimmo, Michael Conforto and Amed Rosario. The Reds, who were the leaders to land Realmuto not too long ago, reportedly couldn’t part ways with outfielder Taylor Trammell, their second-best prospect and a player who appears in multiple top-20 overall rankings. No doubt Nick Senzel was a non-starter.

Sanchez is a name that many baseball fans are familiar with. The moment the Phillies became Darkhorse Darlings last winter, his name started making the rounds as a trade chip. Sanchez has an exciting arm; to call it “live” is to understand that not all living is equal. He has a personal yacht, ‘generations of my name will never have to pay for college’-kind of live arm. It’s a triple-digit arm, and his control over his secondary stuff—of which there are, like, four secondary options—is way ahead of his age and experience. Sanchez embodies the great hope of prospect watching: he’s not touted for his chance at having a solid Major League career, he’s coveted for his chance at having a Hall of Fame one.

I do think his stuff is that good, and I also think that betting your success on young arms that throw dragon fire is a risky strategy. Sanchez is no guarantee precisely because the stuff that makes him so special will stress his arm pitch by pitch. Philadelphia just saw one way that could play out in their division over at Citi Field.

But even if the future is bright for Sanchez—and the Marlins will hope it is if they are to receive anything great for Giancarlo Stanton officially, Christian Yelich, Marcell Ozuna, and now Realmuto—Philadelphia is in win-now mode, and the best way to do just that is to address lineup deficiencies with known commodities. Especially ones at or near their primes. With respect to Jorge Alfaro, a player I like, the Phillies are three, maybe four wins better for 2019. This season and perhaps the next one to four years after it is more valuable than the six to seven pre-free agency years of Sanchez Philadelphia may have gotten.

I suppose you could argue that the Marlins, unable to secure the caliber of minor leaguer that they wanted from other interested teams, might’ve had to accept a best-available package. In that sense, a system’s top prospect doesn’t fit the profile, and the case could be made that the Phillies overpaid. Perhaps they did, but I’m not convinced that was a bad thing, especially if you change the context in which this trade happened from market value to the cost of contending immediately.

Admittedly, this winter has shifted me towards the prospect hype is overdone’ camp. I’m not wholly sure that prospect-hyping is an ownership-endorsed scheme meant to depress salaries like some have suggested (though that isn’t anywhere close to the craziest manipulative publicity scheme I’ve ever heard), but I’ll say this: if you want to contend, foot the bill and go contend. Cash in on the potential for something tangible. To win now, you have to make moves right now, and that’ll cost you. What justifies that sacrifice? How about a division winner pennant and a crack at October’s ultimate prize?

Philadelphia is thought of as a fringe contender. They’re competing in a division that looks like a bar brawl. Four different teams have eyes for the title; a good or bad week at the right or wrong time could decide the winner. Upgrading an average position with an elite, proven producer is a strong move for the moment.

And, of course, it may not be the last. Realmuto is the preamble, the trade that hints at something more significant. A lot of the reaction to Realmuto to the Phillies makes the deal seem like it’s Realmuto and eventually Bryce Harper as if the generational outfielder is set to become the greatest “player to be named later” ever. A word of caution: we’ve seen that elsewhere this winter, but a lot of appetizers became entrees. The players want to eat, but the owners aren’t buying.

Realmuto inspires hope for the next big move. And I still think the Phillies will complete at least one of the two biggest deals left, the same two that have been around all offseason. Not that Philadelphia should fret about Sanchez as it is, but if they add to Realmuto with a Harper or a Machado before the season starts, then the price they paid for Realmuto will be forgotten.

Contenders shouldn’t concern themselves with the far-off future.

Khurram Kalim is a senior writer for Bronx to Bushville.

One thought on “J.T. Realmuto heads to the Phillies at a cost. More importantly: Who else is coming?”