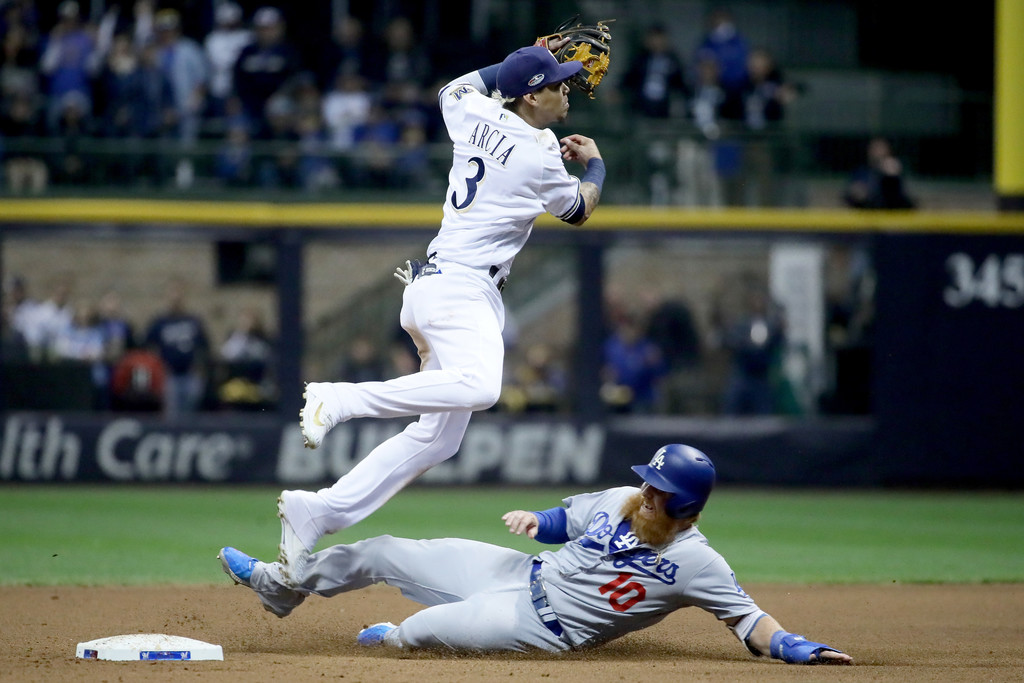 The Milwaukee Brewers enter 2019 as tentative favorites in an NL Central that has vastly improved during the offseason. They’ll need their lineup top-down to perform all season. Here’s a look at some players who could play key roles in 2019. First: Orlando Arcia.

At age 24, Orlando Arcia might be facing the mettle test of his career.

No one worried about Arcia’s defense when he was named the organization’s top prospect in 2015. The smooth-operating shortstop has never lacked a highlight ability in the field with outstanding instincts, tremendous athleticism and an arm as strong as any of his peers. It was his hitting that would be the question mark.

And a question mark it has remained. Arcia’s career .661 OPS remains a major obstacle between Arcia and consideration amongst the best 6s in the majors.

Further, recent league pennant and World Series champions featured the likes of Manny Machado, Xander Bogaerts, Carlos Correa, Francisco Lindor and Corey Seager. Addison Russell stepped up from a pedestrian regular season in 2016 as the Cubs cast a pallor over MLB with their long-awaited world championship.

Indeed, Arcia himself performed well down the stretch and into October with a .959 OPS in the Brewers run toward and just short of the NL pennant, matching his home run total from the regular season in October series against the Los Angeles Dodgers and Colorado Rockies. We can’t forget what spurred those late season heroics, though: a plate approach so lost that the Brewers had to send Arcia down to Triple-A Colorado Springs to rehab. That demotion caused the Brewers to scramble to find replacements and create the patchwork infield that helped sustain the Brewers during a post-All-Star break slump. Arcia’s bWAR for 2018 was -0.1.

In 2019, there can’t be any easy outs in the Brewers lineup. Easy outs killed the Brewers in 2017 as their push for the postseason ended one game shy of getting to the Wild Card Game. In 2018, the Brewers played very well down the stretch, but caught the wind of a September for the ages from Christian Yelich.

If the Brewers are going to defend their division title and reposition themselves for their first National League pennant, or, if Orlando Arcia wants to join the upper ranks of MLB’s best shortstops, the solution for both is the same: Arcia has to be more productive at the plate.

Let’s be clear: Arcia isn’t going to be relied upon the way Craig Counsell will rely on Yelich, Lorenzo Cain, Jesus Aguilar or Travis Shaw. The Brewers, though, have to get more from a guy who hit .200 or lower after 37 of his 119 games with the Brewers in 2018 and got on base at a brutal 27% clip.

And that lost-at-the-plate Arcia also struggled in the field, with range factor, errors and fielding percentage all taking a slide. His inability to hit spilled over into the one area of his game about which no one previously worried.

With Mauricio Dubon actively rehabbing from his season-ending knee injury and Keston Hiura biding his time, this is Arcia’s season of reckoning. 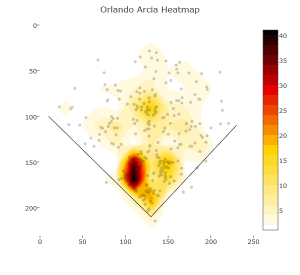 There were two major issues with Arcia at the plate: striking out, and swinging at bad pitches. Arcia has never been a patient hitter, but even in his 100-strikeout 2017, he was able to amass a .324 OBP from the same familiar eighth slot on the lineup card. (Attempts to establish him in the first third of the lineup were pretty quickly scuttled in his abbreviated 2016.) Arcia was less effective putting the ball in play, with grounders hit right to defenders and lazy fly balls (92 tOPS+, .056 BAbip, respectively).

Arcia has always been an easy mark for pitches low and away, with a career 37% swing-and-miss rate on breaking pitches and a full 10% of overall pitches thrown there, both figures courtesy of Brooks Baseball.

The path forward for Arcia, then, isn’t exactly daunting: first, to lay off the breaking stuff that has been his career-long bugaboo, and second, to barrel up the ball. Lost in the sea of admittedly depressing offensive metrics is this bright spot: a .632 BAbip on line drives, paired with an eye-popping tOPS+ of 399. The latter figure is more indicative of a disproportionate reliance on liners for his overall offensive production, but the former shows how effective Arcia is when he’s squaring up. Blessed with exceptional speed and, again, coming off a strong finish to his 2018, Arcia has every reason to build on his post-Colorado Springs rebound, display a more mature, disciplined approach at the plate and better power numbers–relatively speaking–as he enters his third Major League season.

If pitchers are no longer allowed to throw junk and have Arcia get himself out, Arcia gives himself better opportunities to get on base and around the diamond. If he doesn’t, opponents are essentially given two free outs per time through the lineup card: at least two cumulative scoreless innings. A virtual seven-inning game, bullpen notwithstanding.

If 2019 is the five-way divisional dogfight I expect it to be, Orlando Arcia’s Brewers career is at stake. There is reasonable cause for both optimism and concern. And we won’t know what it should be until the games start counting.

[Editor’s note: A reader noted an incorrect phrasing choice. The reader was correct, and the phrase has been corrected. Unlike some other outlets, we own our mistakes. We regret the error.]

4 thoughts on “Defending the NL Central in 2019: Orlando Arcia”