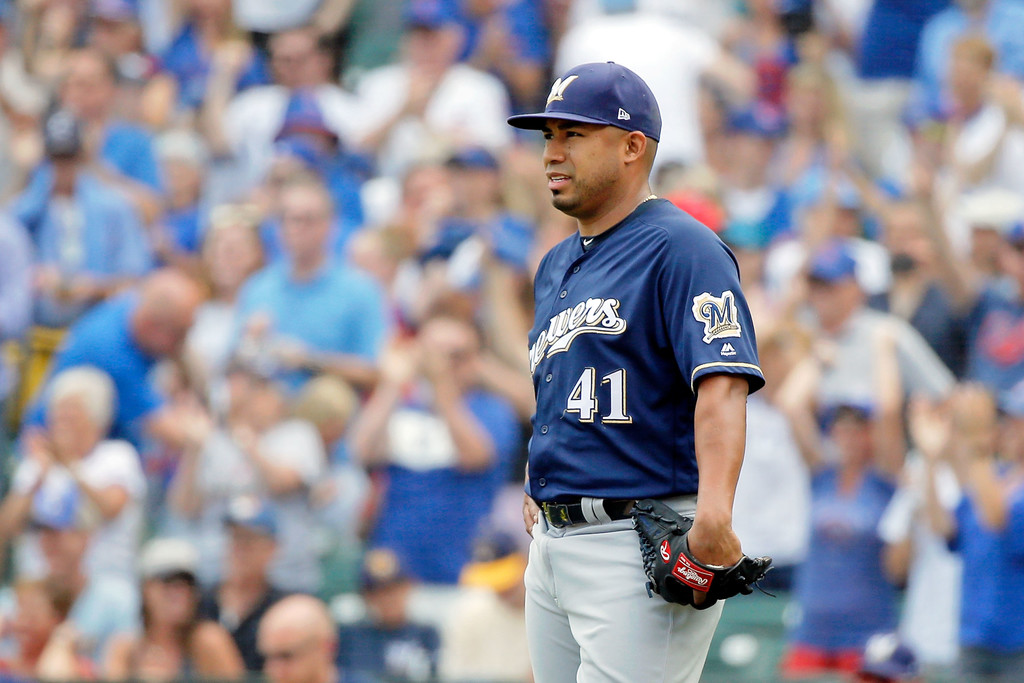 24 hours ago, it looked as though the Milwaukee Brewers had turned a corner on their seesaw 2018 season.

Here we are, and now we know less than we did before this two-game set started.

Fresh off a 7-0 matinee shutout, the Brewers let a series win get away and, even though the standings remain the same as they did before–three games separate first and second place in the NL Central–the Brewers were better off Monday than they are today.

Junior Guerra, a pleasant surprise again for the first time, struggled to an atrocious 3 2/3 inning outing, yielding seven runs (six earned) from nine hits. It was clear early that Guerra didn’t have his best stuff.

Without strong starting pitching, the Brewers needed their offense to take the burden off their pitching. The Crew went 1-2-3 thrice and 1-2-3-4 four times. Even then, they left nine on base and threatened big innings in the two remaining frames.

The Cubs, though, kept their rivals at arm’s length: when the Brewers scored twice in the fourth to make the game 4-2, the Cubs scored three more times. When the Brewers plated two in the seventh, the Cubs added another insurance run. It was a systematic execution of a team that flopped out of the gate. The Cubs tasted blood and went for the kill.

Today, the better team was from the north side of Chicago. I hate typing that.

There were several troubling things to take away from the Brewers’ Wednesday dud. First, Guerra: in his last seven starts, he has gone 1-3 with a 5.73 ERA and 1.67 WHIP. Second, Ryan Braun‘s torso flared up again today and Manny Piña had to leave the game with a shoulder injury that forced him back to Milwaukee for further evaluation. Piña’s dealt with bumps and bruises and multiple shots to the piña all season, but his potential loss leaves the Brewers with Erik Kratz and likely Jacob Nottingham as their less-than-ideal catching duo.

Finally, the Brewers needed to treat this game like the play-in game. Craig Counsell probably should have had Guerra on a shorter leash as he did with Jhoulys Chacin early in the season. When it was clear that Guerra didn’t have it, he should have gone to the bullpen. When it appeared Anthony Rizzo was tagged out at first base, Counsell opted to pocket his challenge. That’s not entirely his responsibility, as was pointed out this afternoon in real-time on Twitter; however, a bold move and a shred of faith in the MLB replay system (which, frankly, isn’t trusted by much of  anyone anymore and with good reason) could have saved a run, ended the third and perhaps helped stabilize a flailing club.

This was one game, as yesterday’s victory was merely one game, but this was a prime opportunity to take it to the division leaders. This was nothing less than an opportunity squandered.

We haven’t spent much time or space here discussing Counsell’s managing this season. From where he was before, Craig Counsell has matured into a solid manager. Yes, he sometimes mishandles the bullpen, but if anyone has paid attention to the Brewers under Counsell during his entire tenure, this is far better than it ever was in his first season at the helm. Yes, he can get too cute with double switches, but more often than not, he trusts his club to get the job done. Often, he believes in his club to a fault, which is why the short leashes for starters earlier this season was so unusual.

On the whole, Counsell is not a micro-managing, game-bungling pseudo-leader who takes too much credit and none of the blame: Wisconsin fans will get plenty of that starting in September from the Lambeau Field press room.

The Brewers came into Wednesday full of hope. They leave Chicago with more banged-up bodies, the same three-game deficit they started with, a pitching staff on the ropes and now they head to St. Louis for another big inter-division series with another rival in the Cardinals, who are hitting the right gear at the right time after underachieving for a good portion of the season.