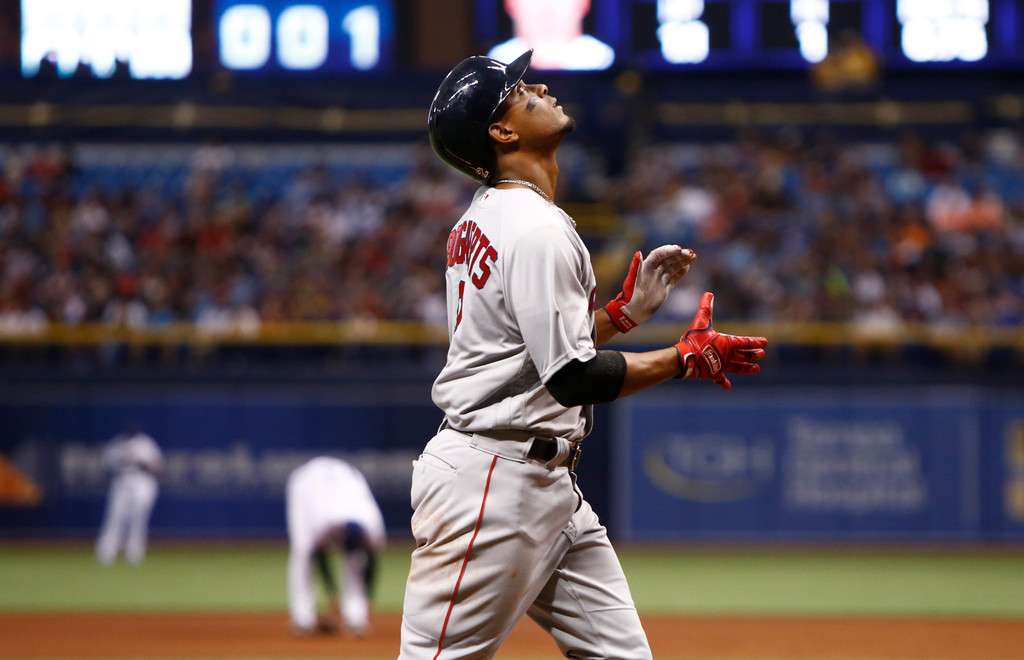 The baseball season is long. And we’re here to help: MLB Overnight covers the interesting night-in, night-out goings-on of The Show.Ichiro the wonder

For all his exploits as a hitter, Ichiro’s most replayed highlights are defensive gems.

The two that immediately come to mind are the Spider-Man catch from 2005:

And the laser-beam that took out Terrence Long from his rookie season:

There have been a few more plays to fill up YouTube highlight reels over the last 16 years, but at 44 it wouldn’t be surprising if the webgems were behind him.

Except that Ichiro just plays ball. If a gem happens, it happens:

Ichiro is back to robbing homers in Seattle.

This. Is. So. Cool. pic.twitter.com/LIdmiqVetW

Ichiro started both of the Mariners’ games so far. He picked up two hits yesterday in Seattle’s loss. No, he’s not ageless. But he’s still fun to watch.

Xander Bogaerts is on the podium at the Small Sample Size Olympics. Through three games, the Red Sox shortstop is 8-12 with five doubles and a home run, good for a 2.000 OPS. Bogaerts’s eight hits lead Boston by five after the season’s first series.

Adam Eaton eats at the top

For his career, Adam Eaton is a good leadoff hitter, even better when leading off an inning. He hit first to start the Nationals’ game against the Reds, then led off an inning three more times during Washington’s 13-7 drubbing of Cincinnati. Eaton went 5-5 with two doubles, a home run, three RBI, and four runs scored. That’s about as productive as a table-setter can be in the modern game, where “get on get over get home” isn’t enough. The leadoff needs to drive in runs, too. Eaton was all over Washington’s 13-run burst.

Meanwhile, Cincinnati hasn’t played particularly bad to start the year. They drew Max Scherzer for their opener and peppered him with hits. They just couldn’t string enough together to drive in runs. Yesterday’s starter, Luis Castillo, gave up six runs but on only six hits in five innings of work. Two of those hits were home runs, one of which was a Matt Adams three-run shot in the first. Castillo’s HR/FB rate last season wasn’t great, but he has plus stuff that produces ground balls or strikeouts and helped him to a strong rookie campaign in 2017. With a little more location consistency, he won’t have to worry about 1/3 of fly balls surrendered becoming home runs (the number he’s saddled with for now). Both teams did damage to each other late. But the top-six in the Reds order had a nice post-Scherzer game yesterday, and Scooter Gennett is flying out of the gate. With a better draw and a couple breaks, this team isn’t 0-2.

Jose Altuve and Carlos Correa went 8-10 against the Rangers yesterday. Altuve is hitting .545, Correa is at .455. They’re a pretty good tandem, clearly.

Dellin Betances is trying to work his way back into high-leverage bullpen plans after the yips got the best of him and his control towards the end of last year. Kevin Pillar had no sympathy to spare:

Who was the last player to accomplish this feat? pic.twitter.com/N18ETGiJXZ

The answer to that tweet’s question, by the way, is Wil Myers.

A night after Johnny Cueto took a perfect game into the seventh for the Giants against the Dodgers, the Twins carried a combined no-no against the Orioles into the eighth. It was a muddy one—starter Kyle Gibson mixed in five walks in his six innings of work—but still near-historic so far as the short box score is concerned.

I just wrote about how the Phillies can improve their rotation to really make the playoff push a lot of people think they can. Vince Velasquez was part of that improvement—both as a way they could get better and a reason they need to get better. He was the latter yesterday:

It’s been an inauspicious start to Philadelphia’s 2018 campaign, one mostly marked by the calls for new manager Gabe Kapler’s job. It’s something to monitor, though right now there’s a sprinkle of fandom hyperbole in the truly questionable decisions mix. It’s still just the first weekend of the season.

Talk about back-to-back lineup tandems that are pretty good, Milwaukee’s new outfielders went into San Diego and smacked around the Padres to the tune of 15 hits, seven RBI and six runs scored, punctuated by Yelich’s own 5-5 day yesterday. The Brewers swept their way through Petco and now head to Miller Park for their home opener against the Cardinals as the team on-the-mark to start this marathon.

Khurram Kalim is a senior writer for Bronx to Bushville.