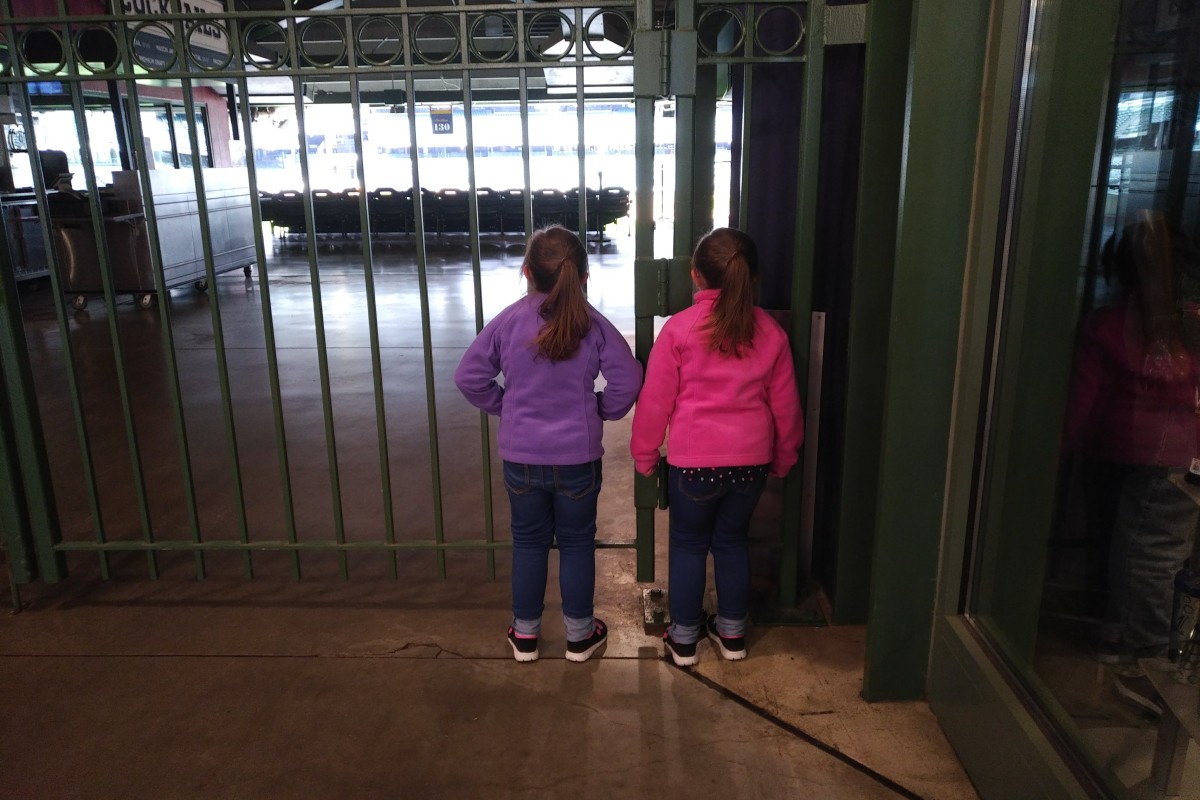 Fathers and daughters and the day they became Brewers fans. I hope.

It’s been a tradition in my family to take our kids to Miller Park the week before the regular season begins. With the excitement that comes with every new baseball season, to make the trip to the stadium, visit the pro shop, be around others who are as excited for baseball as I am, this is the prelude to 162 (and hopefully more) nights and matinees over the next six months.

Though Milwaukee isn’t my hometown, it is where my grandfather found work and moved his family from Upper Michigan over 50 years ago, where my father may or may not have accidentally pirated one of the biggest radio signals in the city for about ten minutes and it is where I was born. The Brewers are my team. Miller Park is my home away from home. And I want my kids to share in my love for baseball and the Brew Crew. And I live close enough now where it’s not unreasonable to make a day trip down to the better city sitting on the shore of Lake Michigan and reconnect with my roots.

This year, thanks to a crabby youngest and an exhausted spouse, the lot fell to me to take my twin girls on the annual pilgrimage. This was going to be a special year for three reasons:

So I loaded the girls up in the minivan and we made the trip south from the Fox River Valley to Milwaukee. We told them beforehand we were going on a long drive and there was a special surprise for them when we got there. We barely made it to Fond du Lac (about a third of the way there and forever lampooned in a Saturday Night Live sketch that still raises the ire of those from FdL) before E asked if we were there yet.

Thankfully, it’s only a 90-mile trip, and she didn’t ask again until we were just about to 41 and Good Hope.

I took the Bluemound exit by the zoo and navigated the narrowing east-west thoroughfare through Wauwatosa and then into Milwaukee, and there it was: the distinct Miller Park roof, arching above the neighborhood’s tree line. I had the girls turn from the 52nd episode of Kipper on the DVD player and asked them what it was.

They weren’t sure. I said the roof beams were bridges, which I appreciated. When you’re four, these things aren’t really supposed to make sense.

I turned onto Yount Drive and their little minds were blown. There was Milwaukee’s Camelot in all its glory, brick facade meeting those green ‘bridges’. ‘Whoa!’, one of them exclaimed. ‘It’s a big…building. It’s a big baseball building!‘

We drew closer to the stadium’s year-round entrance, found a parking spot and I opened the minivan door. The forecast called for cloudy skies and highs in the mid-40s. There were clouds, but the 40s were nowhere to be found; rather, we were greeted with that inimitable stiff, cold Lake Michigan wind that cuts through every layer until it stops at the bone. I got the girls out of the van and they were less than enthusiastic. So was I, for that matter.

We fought the wind all the way to the Hot Corner doors, stepped inside, rediscovered the feeling in our hands and the girls took a look around, wide-eyed. We went in the Team Store, looked around, I found a purple Brewers baseball, E found the bedazzled pink girls’ Brewers jersey. We settled on some pink souvenir bats. While in the store, I looked out a corner window and got her first good look at the diamond. She called her sister over and we all looked onto the field. I wanted to find a way to get to the concourse so they could see the field in all its glory. Alas, we were on the outside looking in.

The girls said thank you to the cashier and we went on our way, where there was a group formed in the concourse a tour guide giving some general information and orientation instructions. I fought the temptation to sneak into the tour group, as there was no obvious sign of needing to pay and we still had unfinished business outside. There was a surprise involved, and the girls made sure that I remembered it.

With the wind now at our backs, we made our way back to the van and I drove from one end of the lot to the other, where Helfaer Field sits, not far from where Milwaukee County Stadium’s home plate once stood. This Little League field is fully-functional during the season replete with seats, bleachers and concessions, with a large playground in right-center, the Miller Park home plate entrance and clock tower in the distance and it can be reserved for events.

If you think I’m not having a birthday party there someday with batting practice and a full tailgate, you’re only deluding yourself.

I parked the van, got the kids unbuckled and showed them my baseball glove.

They looked at it and E answered, ‘A baseball glove!’

‘That’s right!’ I then took their gloves out. ‘What are these?’

It took a moment, but their eyes lit up. ‘Baseball gloves! And PINK!’ They couldn’t have bigger smiles. I took I‘s hand, put it in her glove, showed her how her fingers were supposed to fit, then did the same with E. I told them how much I looked forward to this day, and that we would go over by the playground and play catch and then they could run around and play. They were confused by the idea of ‘catch’, but very open to the idea of running around on the playground. We braved the wind again, which somehow felt colder, walked past Helfaer Field and there we were on the grass.

This was the moment this daddy had waited for.

I told them to hold their gloves up and look the ball into the glove. I tossed the soft-touch ball, which got picked up by the wind, sailed right past I‘s shoulder, to say nothing of going nowhere near her glove, and landed about six feet behind her. She ran and got the ball; I extended my glove and told her to throw it back. A soft, underhand toss later, it landed about two feet in front of me.

We’ll work on the knuckleball in time.

I did the same with E, and essentially had the same result. They both were shivering cold and decided to forgo the playground in favor of heading back to the van.

If I said I wasn’t frustrated, I’d be lying. This was a day I eagerly looked forward to pretty much since they were born. I want them to share in my passion for the game, to have these moments I didn’t get with my father, who injured his neck in a major car accident while on a business trip in California and I was coming of Little League age. This was my day with them, when I did my best to set their course toward a lifetime of shared love for Brewers baseball.

Conceding defeat, I did what any self-respecting daddy would: I bribed them with food. I texted my brother on whether to take them to Gilles or Kopp’s, another heavy hitter further west down Bluemound in Brookfield, his response was both clear and immediate: ‘Can’t go wrong!’

We had burgers and chicken fingers and custard sufficient to our liking, and then began the long trip home. As we began our return, I heard a voice pick up from the back of the van.

‘Thank you for bringing us here today.’

We got home, they ran into the house with their mini-bats and told Mama all about their day. Little brother was envious of their prizes, but more excited to see Dada again. We got them into their jammies and into bed. I read them their story, we said our bedtime prayers and I kissed them good night.

I asked E what her favorite part of the day was. ‘Getting ice cream,’ she said. 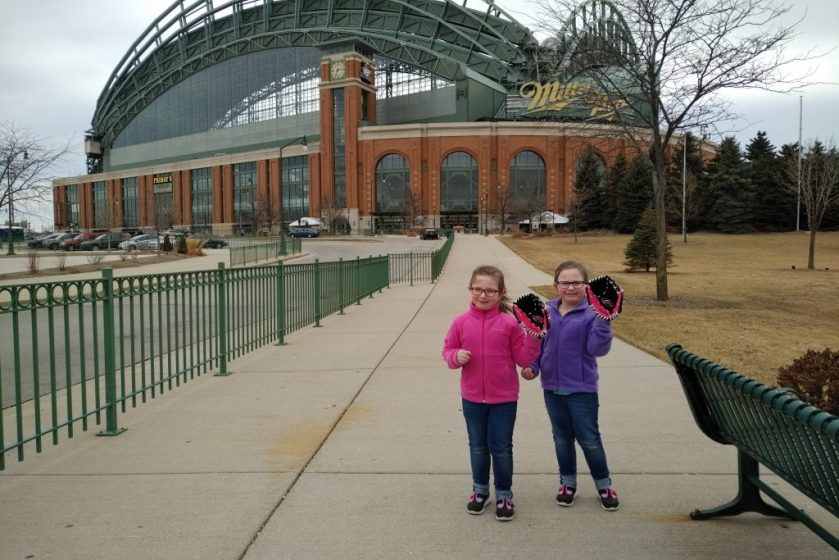