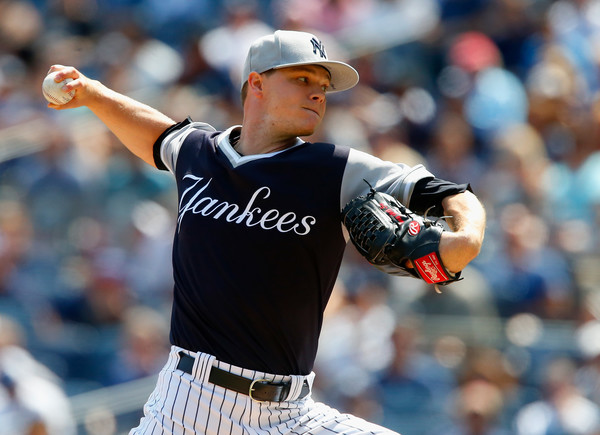 From the time the New York Yankees expressed interest in Sonny Gray up until they surrendered three prospects for the Oakland Athletics top hurler, the potential union between both sides was never seen as a slam dunk.

On one hand, Gray’s inconsistencies and injuries were an obvious concern.

The 27-year-old put together impressive back-to-back campaigns — including a 2015 season that saw him make his only All-Star team while sporting a 2.73 ERA in 31 starts — but allowed 133 hits in 117 innings pitched last season, good for a WHIP of 1.50 and ERA of 5.69. Gray has also seen his name on the disabled list on numerous occasions, dealing with everything from shoulder and lat strains to right ankle contusions and sore extensor muscles.

But Yankees fans weren’t only concerned with Gray’s impressive-yet-spotty track record. It was also the fact of giving to get.

Ever since the 2016 trade deadline, the organization’s mantra has been building from within. The one-time “Yankee Way” of trading prospects for veterans and signing players over 30 years of age to long-term pacts was thrown out the window, instead replaced with compiling a pool of prospects that was considered one of the best in baseball.

There were a number of names rumored to be heading out west — most of which were prospects that were expected to have futures in the Bronx.

When the Yankees and A’s finally pulled the trigger on the final day of July, a collective sigh of relief took place. The Yankees traded Jorge Mateo — once a top prospect that fell out of favor in the organization — as well as Dustin Fowler and James Kaprielian — two high upside prospects dealing with serious injuries — for the starter’s services.

But once Gray put on the navy blue cap for the first time, those sighs of relief have quickly turned to shouts of joy.

And while the numbers are strong, that’s not what it’s all about. What’s equally as impressive is his seamless transition from laid-off Northern California to the hustle and bustle of New York City.

Despite getting minimal run support — which led to him losing his first two games as a Yankee — Gray battled on the road against two high-powered offenses in the Toronto Blue Jays and Cleveland Indians. Even though he had less than stellar stuff in his first taste of The Rivalry, Gray gave up just two runs over five innings and 106 pitches.

In his gray uniform, Gray has battled. And in his two starts on the Yankee Stadium mound, Sonny has shined.

Before his first game against the Boston Red Sox, Gray pitched in the Subway Series. His first home game was a classic pitching duel, as he opposed — and topped — New York Mets ace Jacob deGrom. Gray’s latest start was also his best, as he went seven strong innings against the competitive Seattle Mariners, striking out nine batters and allowing just three hits along the way.

Because he’s under contract until 2020, he’ll be around for a while. A one-two-three punch of Gray, Luis Severino and Masahiro Tanaka will be a strong complement to the young, powerful offense the Yankees currently have — making this investment just as good now as it can be later.

The organization has made plenty of deals that stole the headlines at the trade deadline — acquiring names like David Cone and David Justice come to mind.

Gray doesn’t have the pedigree that Cone did. He isn’t the final piece to a World Series like Justice was.

But the Yankees couldn’t have asked for more out of Gray thus far. His methodical pace on the mound may double a New York minute but his effort has quickly made him a fan favorite.

And most importantly, someone this team can build around.

Dan Federico is a co-founder and lead writer for Bronx to Bushville.